Nurturing the Next Generation

The History of Japanese Immigration 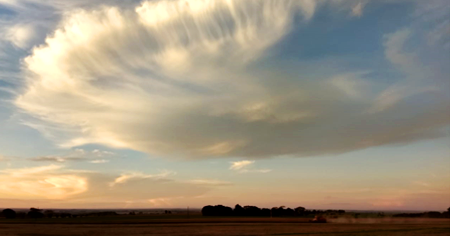 The Japanese immigration started in 1866, when the overseas travel ban (Sakoku decree) was lifted more than 150 years ago. Starting from the sugar-cane plantation in the Hawaii Kingdom, Japanese people went to North America, such as the United States and Canada, and then to Peru in1899 and Brazil in 1924. However, in 1924, Japanese immigration was totally banned in the United States, so they began to migrate to South America, instead of migrating to North America. As a result, there were around 770 thousand migrants before World War Ⅱ, and other 260 thousand after the war.

The Nikkei People in Latin America

The people who migrated from Japan to other countries are called Issei (1st generation), and their child Ni-sei (2nd gen.), then grandchild San-sei (3rd gen.). Japanese people gained trust with their hard work, and they could build good social status in Latin America. Currently, around 2, 13 million Nikkei people are living in Latin America (data of October 2015). 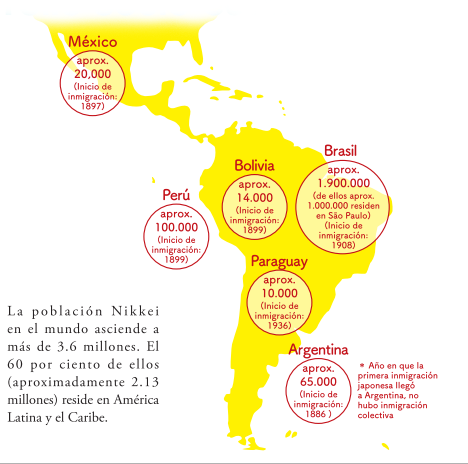 From: Ministry of Foreign Affairs of Japan,
“The Nikkei – Connecting Japan to Latin America and Caribe –”

Nikkei People that Overcame Difficulties and was Active in Latin America 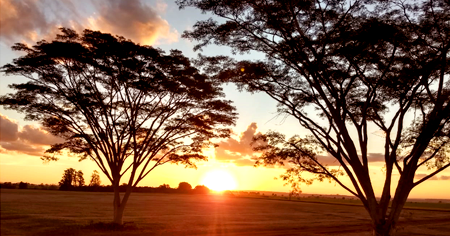 As many of you may know, 781 Japanese families went to Brazil by ship called Kasadomaru in order to work as coffee farmers as contract migrants in 1908. They were supposed to work there for several years and then go back to Japan with some savings, but the reality was so much different from what they had thought. Looking at the situation, even someone said that the migration is implemented in order to compensate for the shortage of workforce due to the abolishment of the slave system. However, without giving in to the difficulties they faced, most of them chose to be independent farmers, and they pooled money in order to organize group admission places and agricultural cooperatives. After that, these organizations grew up to be ones which have a big role in Brazilian agriculture. In those undeveloped lands, Japanese migrants struggled with primitive forests and endemic diseases but they overcame those and contributed to the development of agriculture in the other countries.
For example: in Paraguay, they led soy cultivation, which is the current main crop in the country; in Bolivia, they support cultivation of rice, soy, wheat and citrus. Also, they started the vegetable crop, which had not been consumed before, and vegetable cultivation took a firm hold in the country and people’s diet had been improved.
In Argentina, there are many migrants from Okinawa, and also from other countries around. Most of them work with flowers or laundry shops. The flower cultivation started from them, which is a current important industry in Argentina and their contribution is well known by the locals.

From: Ministry of Foreign Affairs of Japan,
“The Nikkei – Connecting Japan to Latin America and Caribe –” 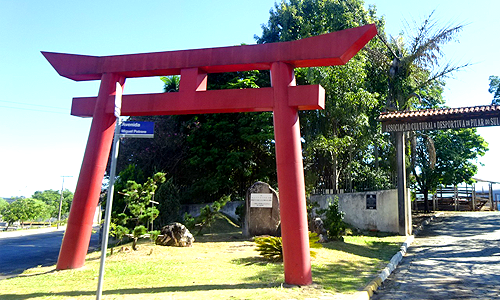 The first migration vessel “Kasado-maru” departed from Kobe prefecture in Japan to Brazil in 1908, taking immigrants to work at coffee crops. Because of the bad working conditions, many of them decided to buy their own land and became independent farmers. After struggling to clear undeveloped land and farming in different climates and lean lands, it has become possible to grow vegetables and fruits little by little. From their sincere and steady work, the word “Japones Garantido”, which means “reliable Japanese” was born, and they won the trust of Brazilian society. During the next 100 years, more than 260 thousand Japanese moved to Brazil and built the current biggest Nikkei Community in the world, where about 2 million of people live. The Japanese food is also very appreciated in Brazil, making many people go to “Liberdade” (the Asian neighborhood in São Paulo) on weekends to buy Japanese stuff. 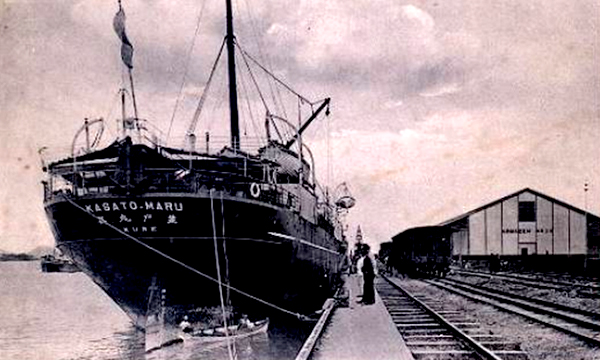 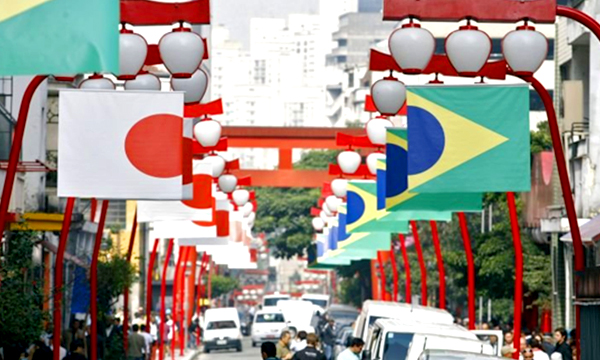 Nowadays, Brazil is one of the largest producers of soy, coffee, sugar and other stuff and as an agricultural powerhouse along with the United States; it is increasing its presence in the agricultural trade. The Agricultural Cooperative of Cotia which was founded in 1927 by Japanese migrants has grown to be the largest agricultural cooperative in Brazil, and in 1952, the number of its members exceeded 5 thousand. In the second half of the 1970’s decade, Japan started a development project in “Cerrado”, Brazilian savanna located in the midwest, with the cooperation of Cotia’s Cooperative members. After 20 years of work, the “Cerrado” turned into a productive region. On the other hand, due to the recession in the late 1980s, the Cooperative of Cotia had a large amount of debt and was dissolved in 1994. Utilizing the remaining facilities, there are agricultural cooperatives that have continued in each region, and in Brazil, the Japanese are praised as “the god of agriculture”, and Nikkei are currently managing agriculture in various parts of Brazil. For example, Paraná and Mato Grosso do Sul produces large-scale grains, Pará produces tropical fruits and coffee, Minas Gerais produces vegetables, São Paulo produces fruits and vegetables, and Santa Catarina produce fruits.

Resources: The 100 years of Japanese Immigration in Brazil 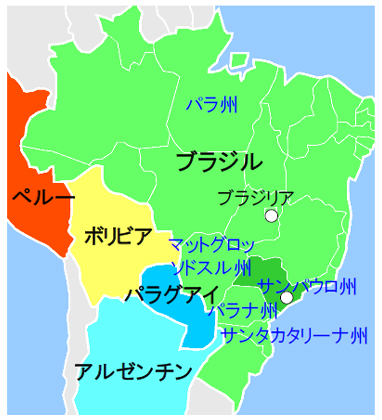 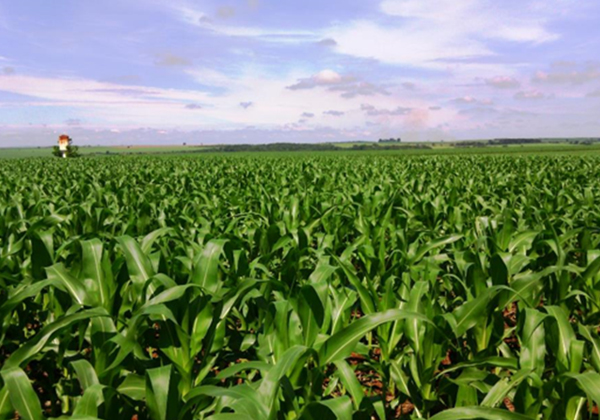 The beginning of immigration to Argentina was not government-led migration, but the migration of Kinzo Makino, a train driver in 1886 to Cordoba. The migrants on the “Kasado-maru” included the people who disembarked in Buenos Aires before arriving in Santos, Brazil, and people who were migrated from neighboring countries. Most of them were came from Okinawa and Kagoshima, therefore, there are many Nikkei people from those 2 prefectures now.
In Buenos Aires, there were many Japanese who ran a dry-cleaning business and café, and there were also people who worked in factories and ports, and people who were engaged in agriculture (flowers), fishing and so on. In 1953, Cooperative for Colonization was established in Argentina for immigration procedures And in the 1960s and 1970s, many Japanese migrants went to Argentina in search of agricultural potential. Also, there is Japanese garden made by Nikkei people in Buenos Aires and many people participate in The Bon Odori Festival which is held every January in La Plata. 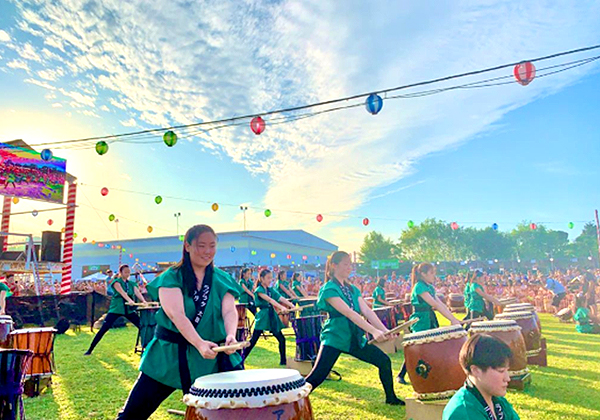 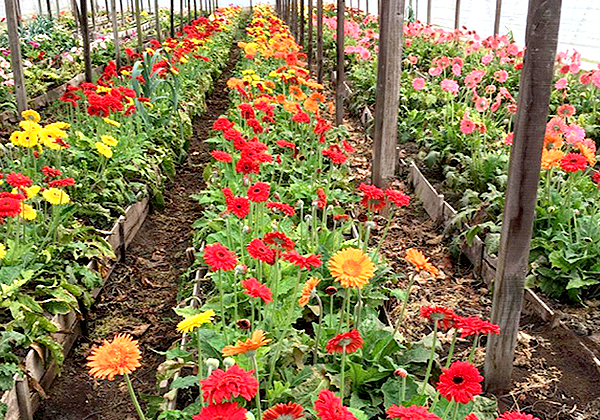 Some Japanese who went to Argentina are working on flower production, and Japanese farmers still produce flowers (cut flowers, pots, foliage plants, etc.) in the suburbs of Buenos Aires. In 1998, the Cooperative of Flower and Plants Producers Mercoflor opened direct sales market Mercoflor. Also, the Cooperative of Floriculture Ecoflor was established in 2015 and sells flowers as well. In addition, Jardin America in Misiones Province also has a Japanese settlement, which mainly produces Mate Tea, cassava and vegetables, and also manufactures and sells bottled processed products such as pickles and jams. 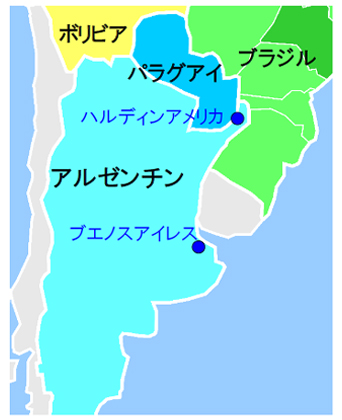 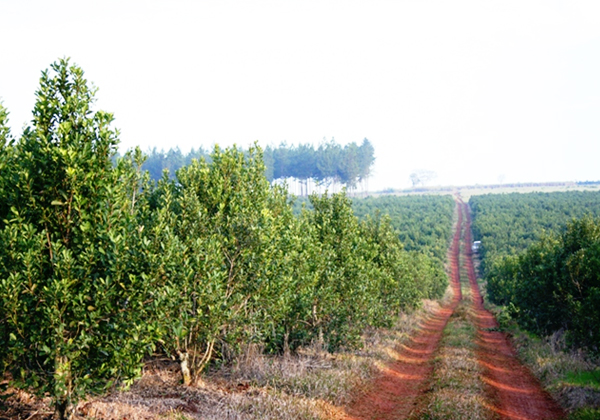 The immigration to Paraguay started in La Colmena’s colony in 1936, and spread to other regions later. The migrants created the current Japanese settlements through the great effort of carving out the primeval forest and cultivating land where crops could be cultivated. The immigrants’ effort brought agricultural development to Paraguay and nowadays Paraguay is a small but leading soybean producer in the world. (2019-20 was the 5th, after Brazil, the United States, Argentina and China).
According to Japanese Association’s Federation in Paraguay, there are 10 Japanese associations (according to JICA there are 10 colonies). Japanese culture is inherited in the settlements, and Japanese is used on a daily basis along with Spanish, so Japanese proficiency is very high and some people choose to work in Japan. Also, because the cost of living is low and we can use Japanese in Paraguay, many retired Japanese people choose to migrate to the country. 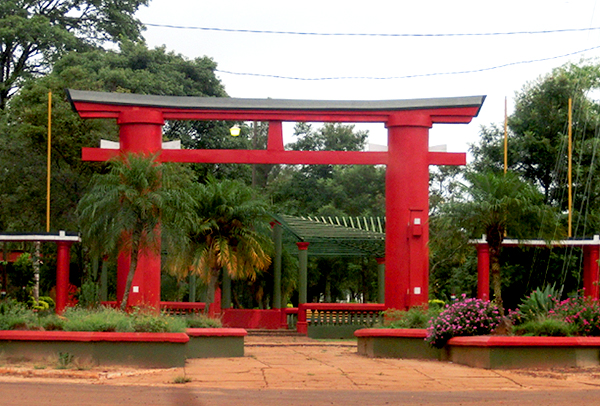 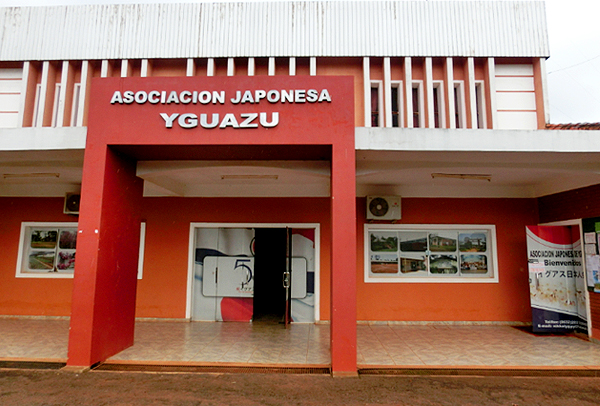 Paraguay is an agricultural country, where 60% of exportations are agricultural and livestock products, and Japanese farmers have led the agricultural production in Paraguay by introducing soybean production, which has become an exported agricultural product. Still now, agriculture is a primary industry of Japanese settlements, and there are 5 cooperativas (Amamby,Coop, La Paz Coo, Coop Pirapo, CAICA e Coop Ygauzu, Their main products are Soy, Wheat and Corn, they also have silos to store them. There is a “Central Cooperativa Nikkei Argícola” that coordinates the other cooperatives, also have control and support the CETAPAR, an Agricultural Research Center. 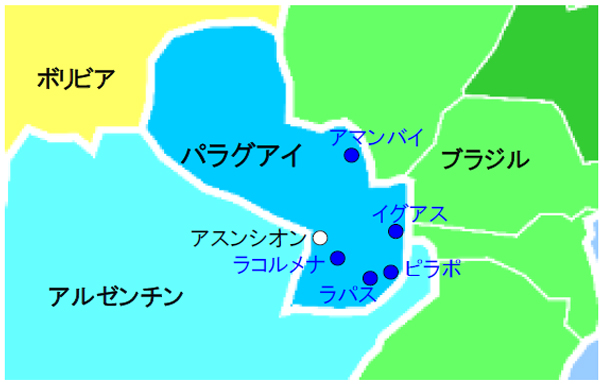 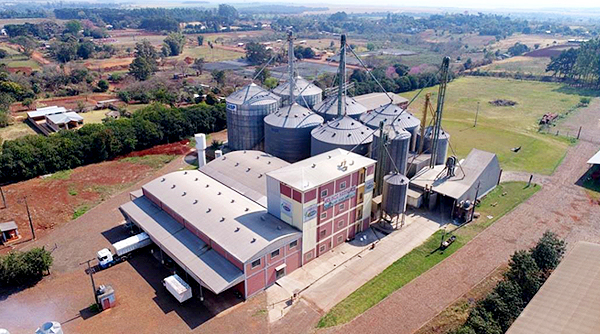 The Japanese immigration to Bolivia started in 1899, when the immigrants who were in Peru decided to move to Bolivia to work in a rubber producing area. Since Okinawa became a battlefield in World War Ⅱ and was placed under the control of the US military after the war, Japanese residents of Bolivia called on the war victims of Okinawa to relocate. After that, the Ryukyu’s Government (actual Okinawa) took over the migration of Okinawans to Bolivia, and in 1954 established a recruitment of agricultural immigrants to Bolivia in South America. They arrived in Bolivia in August and entered into the Uruma settlement, but moved due to an epidemic and was finally approved by the Bolivian government to establish Colonia Okinawa in 1957. Also, Toshimichi Nishikawa, who ran the sugar refinery industry, called for the move to San Juan and settled in San Juan in 1955. The planned immigration continued until 1969, based on the Japan-Bolivia migration agreement.
Currently, the generation has advanced to the fourth generation, and there are about 900 Nikkei living in Okinawa Settlement and more than 700 living in San Juan Settlement. Since Japanese is used on a daily basis in the settlement, Japanese ability is very high. Also, some Japanese cultural events such as Undo-kai and Keiro-kai are held. 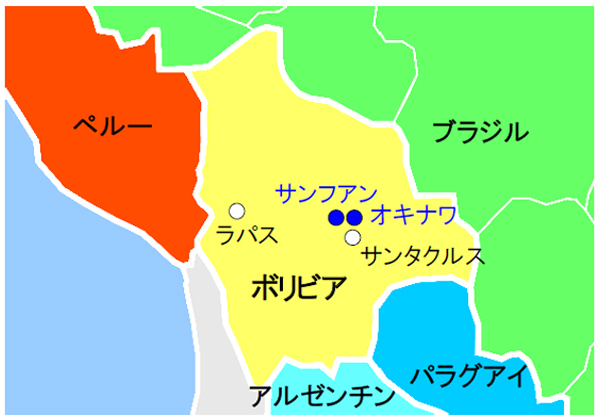 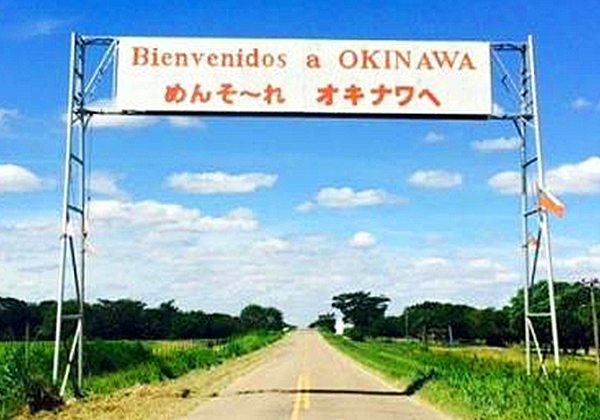 The 2 areas, Okinawa Settlement (Colonia Okinawa) and San Juan Settlement, are both producing mainly grains in large-scale. At Colonia Okinawa Agricultural Cooperative, large-scale management is carried out by mechanization that combines livestock farming mainly on soybeans. In particular, it is the largest soybeans production area. Also, they have silos and flour mills, and produce pasta. Now, its farming area is bigger than that of Okinawa and has 6ha. The San Juan Agricultural Cooperative is promoting poultry farming and mechanization, and has become one of the leading producers of rice, soybeans, poultry farming, and citrus fruits in Bolivia. 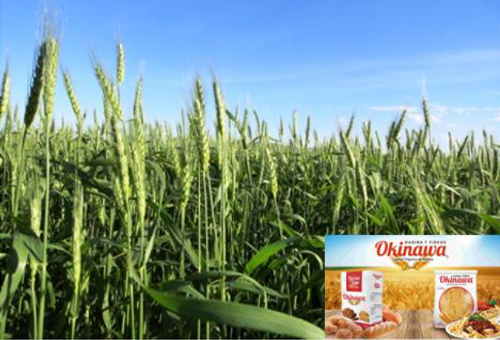 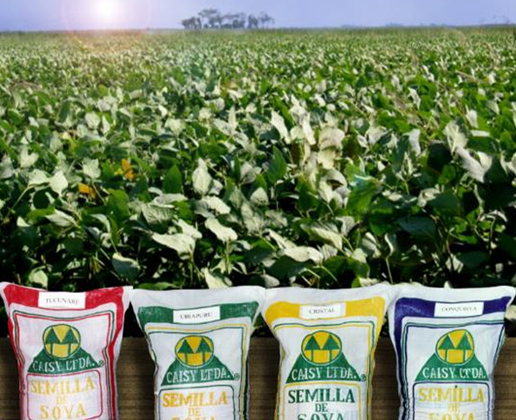 Peru was the 1st Country that made diplomatic relations with Japan in South America, and also was the first destination of Japanese immigrants. In 1899, the first immigration ship “Sakura-maru” arrived in Peru with 790 Japanese with an agricultural contract, but the life and the working environment wasn’t what they had expected, and that caused deaths and escapes. Although many of the early migrants left agriculture, some continued to farm, others once saved money in the city and then invested in agriculture. Japanese farmers introduced Kinkan, Mandarins and irrigated rice to Peru. On the other hand, the migrants who could not adapt to agriculture started barber shops and restaurants. As the number of Japanese people in Peru increased, the Japanese Association was established in 1910 for mutual aid and friendship, and other Japanese associations were established one after another in each region.
However, due to World War Ⅱ, the situation was extremely severe, including riots against Japanese people, a ban on Japanese language education, repatriation to the United States, and confiscation of land and property. After the war, the Japanese communities recovered their economic power and were adapted to Peruvian society. In 1990, President Fujimori was elected and the presence of Nikkei in Peru was solidified. Now, there are about one million of Nikkei people living in Peru, forming the third largest Nikkei society in the world after Brazil and the United States. 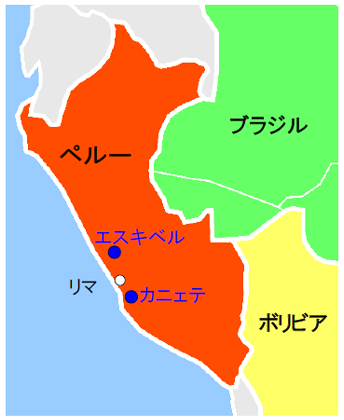 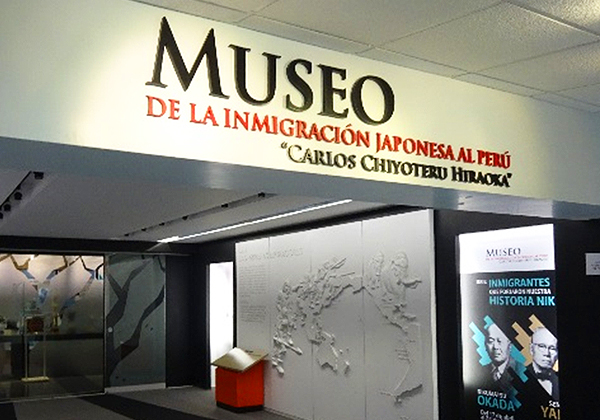 After the Second World War, since large-scale farmers had to repatriate to the USA or transfer their land to small farmers, today’s Nikkei farmers are mainly small farmers. The Cañete city, located in a coastal area, near Lima, was the first Japanese Colony, and still now many Nikkei farmers produce mandarin, grapes and asparagus. At Esquível, in Huaral city, Nikkei produce artichoke and corn, and their bottled products are exported to Europe. 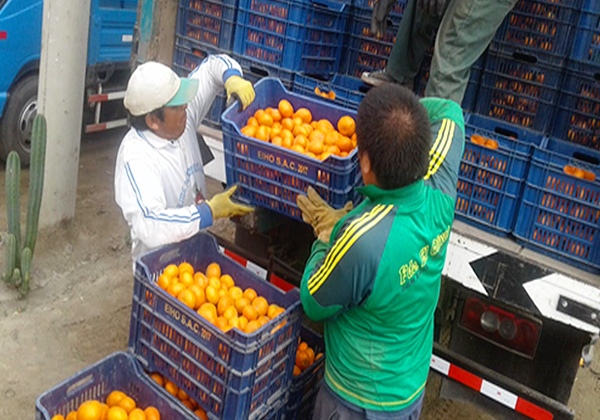 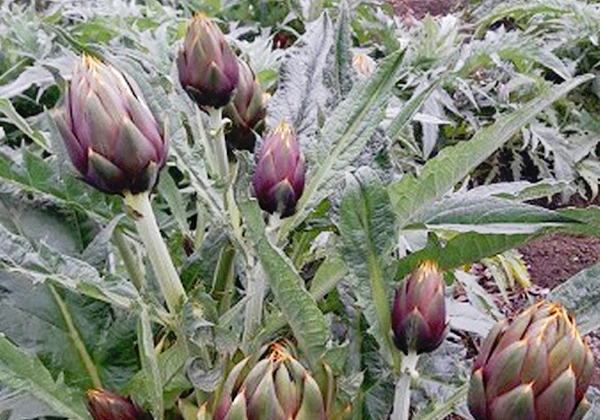